This dataset includes fourteen variables pertaining to housing prices from census tracts in the Boston area collected by the US Census Bureau. The figure below displays a portion of the data; observe the last column (CAT. MEDV). This variable has been derived from the MEDV variable by assigning a 1 for MEDV levels above 30 (>= 30) and a 0 for levels below 30 (<30) and will not be used in this example. 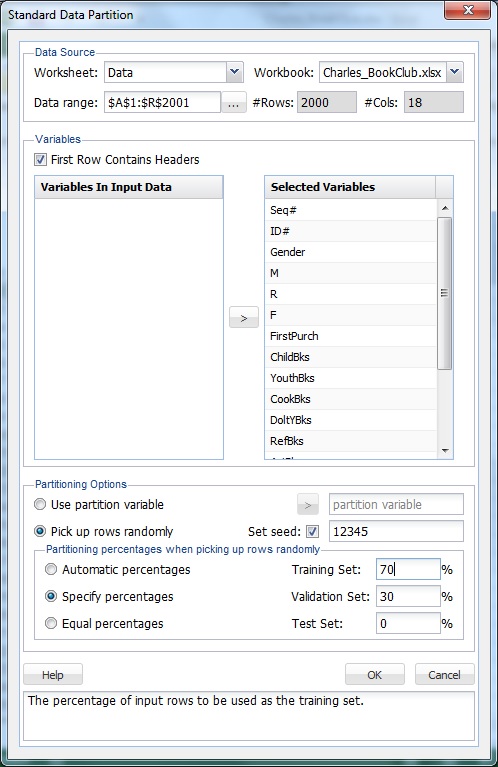 This example develops a model for predicting the median price of a house in a census track in the Boston area.

Select the nominal categorical variable, CHAS, as a Categorical Variable. This variable is a 1 if the housing tract is located adjacent to the Charles River.

One major assumption of Logistic Regression is that each observation provides equal information. Analytic Solver Data Mining offers an opportunity to provide a Weight Variable. Using a Weight Variable allows the user to allocate a weight to each record. A record with a large weight will influence the model more than a record with a smaller weight. For the purposes of this example, a Weight Variable will not be used.

Choose the value that will be the indicator of “Success” by clicking the down arrow next to Success Class. In this example, we will use the default of 1. 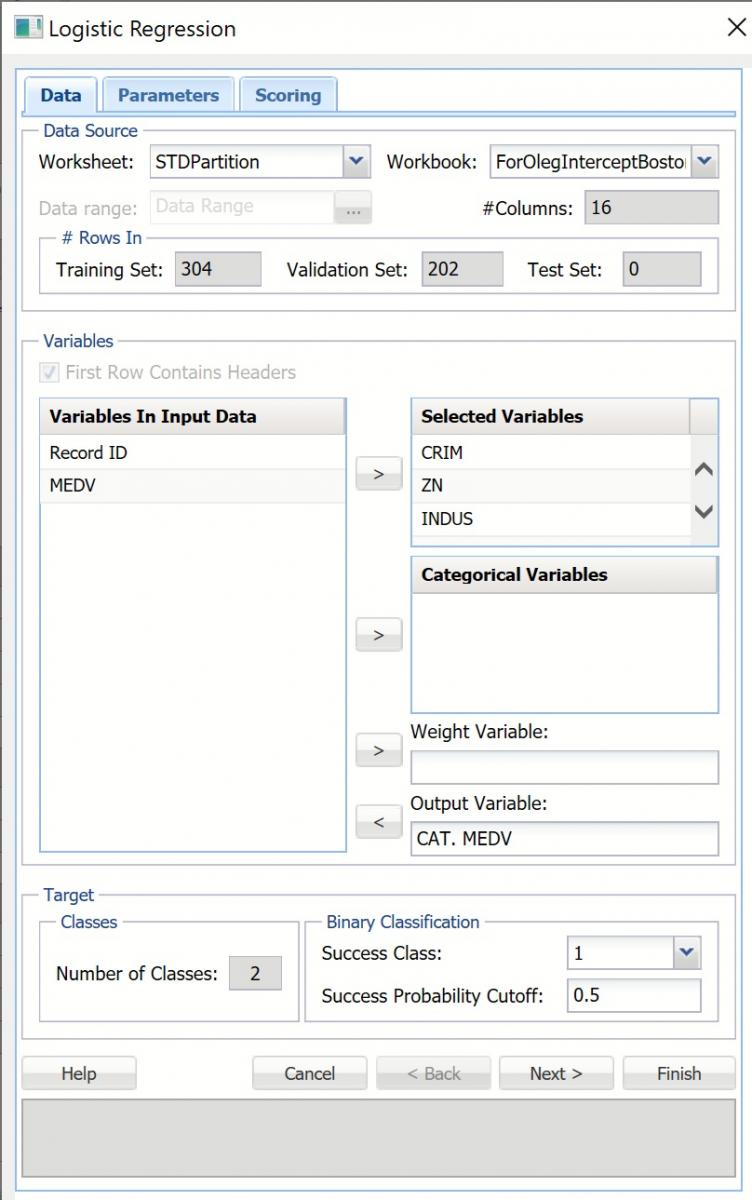 Click Next to advance to the Logistic Regression - Parameters dialog.

Keep Fit Intercept selected, the default setting, to fit the Logistic Regression intercept. If this option is not selected, Analytic Solver will force the intercept term to 0.

Keep the default of 50 for the Maximum # iterations. Estimating the coefficients in the Logistic Regression algorithm requires an iterative non-linear maximization procedure. You can specify a maximum number of iterations to prevent the program from getting lost in very lengthy iterative loops. This value must be an integer greater than 0 or less than or equal to 100 (1< value <= 100). 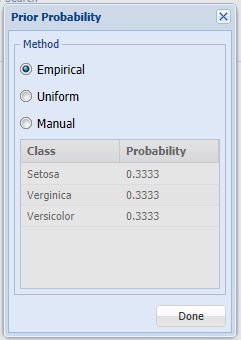 Analytic Solver will incorporate prior assumptions about how frequently the different classes occur in the partitions.

For this example, click Done to select the default of Empirical and close the dialog.

Select Variance - Covariance Matrix. When this option is selected, Analytic Solver will display the coefficient covariance matrix in the output. Entries in the matrix are the covariances between the indicated coefficients. The “on-diagonal” values are the estimated variances of the corresponding coefficients.

Select Multicollinearity Diagnostics. At times, variables can be highly correlated with one another which can result in large standard errors for the affected coefficients. Analytic Solver will display information useful in dealing with this problem if this option is selected.

Keep the default selection for Maximum Subset Size. This option can take on values of 1 up to N where N is the number of Selected Variables. The default setting is N. Use some caution when setting this option to a low value, especially if your model contains categorical variables. If the number of total features (continuous variables + encoded categorical variables) is substantially larger than this option setting, then this feature will filter out all subsets (resulting in a blank Feature Selection table). 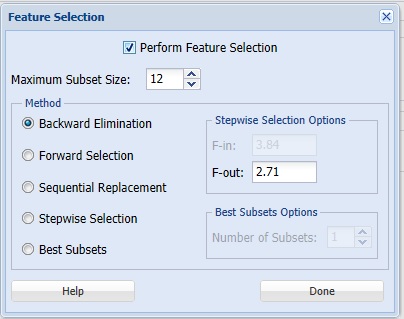 Click Done to accept the default choice, Backward Elimination with an F-out setting of 2.71, and return to the Parameters dialog, then click Next to advance to the Scoring dialog. 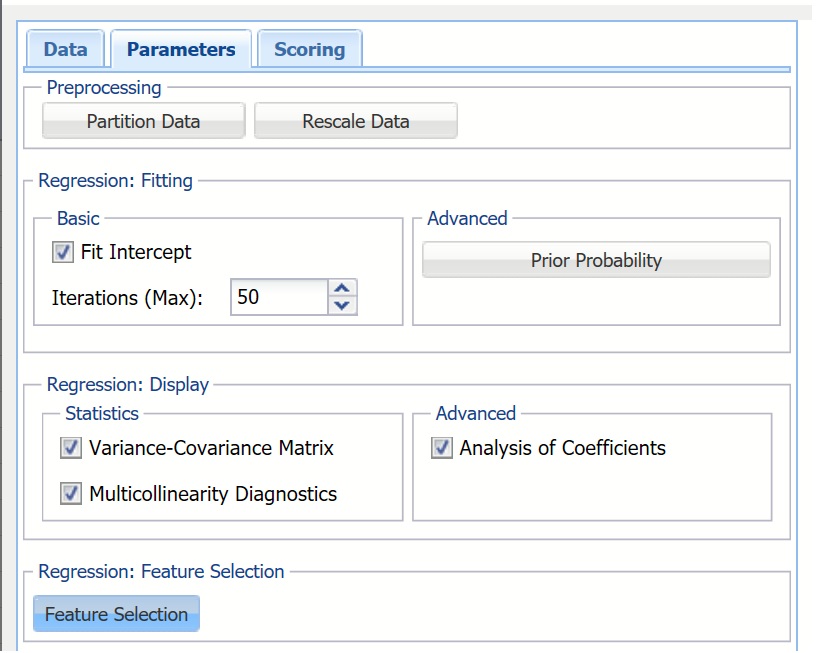 Select Detailed Report, Summary Report and Lift Charts under both Score Training Data and Score Validation Data. Analytic Solver will create a detailed report, complete with the Output Navigator for ease in routing to specific areas in the output, a report that summarizes the regression output for both datasets, and lift charts, ROC curves, and Decile charts for both partitions.

Since we did not create a test partition when we partitioned our dataset, Score Test Data options are disabled. See the chapter “Data Mining Partitioning” for details on how to create a test set.

For information on scoring in a worksheet or database, please see the “Scoring New Data” chapter in the Analytic Solver Data MiningUser Guide.

Click Finish. The logistic regression output is to the right of the STDPartition worksheet. Use the Output Navigator onLogReg_Output to navigate through the output.

A Confusion Matrix is used to evaluate the performance of a classification method. This matrix summarizes the records that were classified correctly and those that were not. 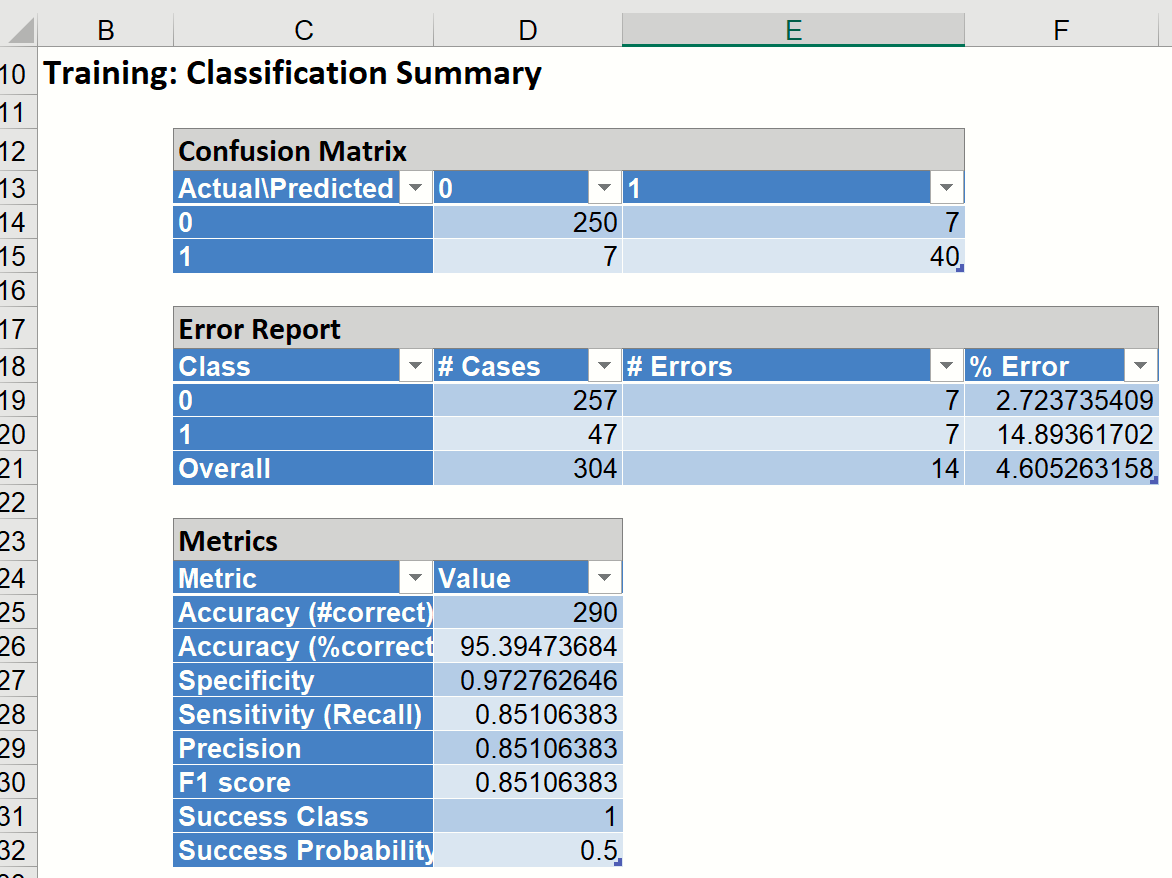 down to view the Training: Classification Summary table. 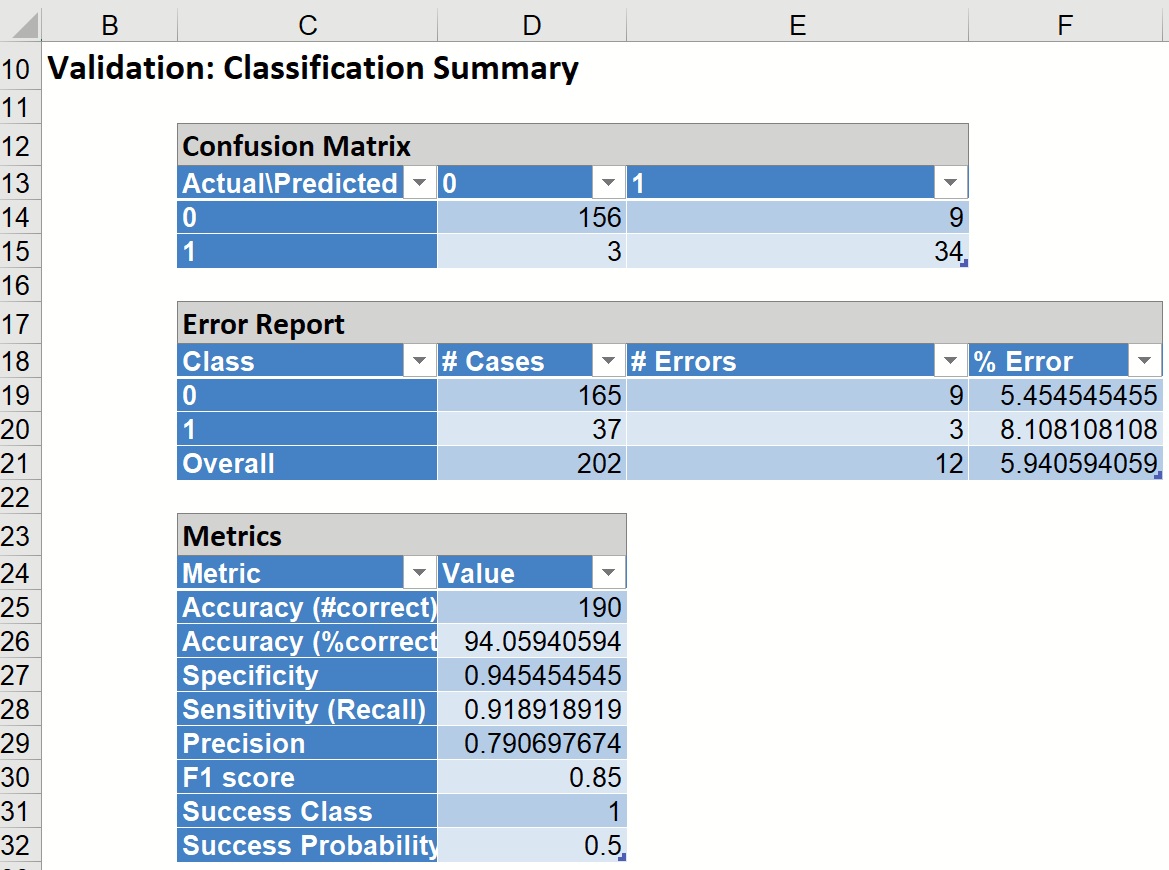 Click the Predictor Screening hyperlink in the Output Navigator to display the Model Predictors table. In V2015, a new preprocessing feature selection step has been added to prevent predictors, causing rank deficiency of the design matrix, from becoming part of the model. Included and excluded predictors are shown in the table below. In this model there were no excluded predictors. All predictors were eligible to enter the model passing the tolerance threshold of 5.2587E-10. This denotes a tolerance beyond which a variance - covariance matrix is not exactly singular to within machine precision. The test is based on the diagonal elements of the triangular factor R resulting from Rank-Revealing QR Decomposition. Predictors that do not pass the test are excluded.

Note: If a predictor is excluded, the corresponding coefficient estimates will be 0 in the regression model and the variable - covariance matrix would contain all zeros in the rows and columns that correspond to the excluded predictor. Multicollinearity diagnostics, variable selection and other remaining output will be calculated for the reduced model.

The design matrix may be rank-deficient for several reasons. The most common cause of an ill-conditioned regression problem is the presence of feature(s) that can be exactly or approximately represented by a linear combination of other feature(s). For example, assume that among predictors you have 3 input variables X, Y and Z where Z = a * X + b * Y where a and b are constants. This will cause the design matrix to not have a full rank. Therefore, one of these 3 variables will not pass the threshold for entrance and will be excluded from the final regression model. 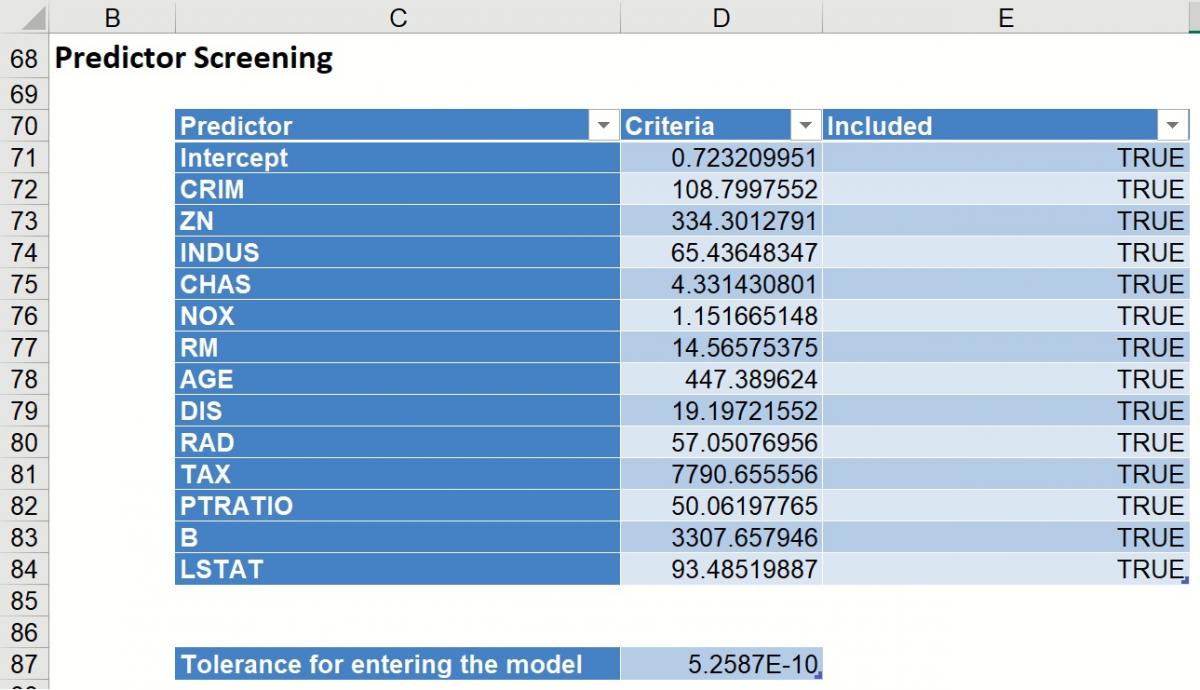 Since we selected Perform Feature Selection on the Feature Selection dialog, Analytic Solver has produced the following output on the LogReg_FS tab which displays the variables that are included in the subsets. This table contains the three best subsets of variables with up to a maximum of 12 features (plus the constant). This table contains the five subsets with the highest Residual Sum of Squares values.

In this table, every model includes a constant term (since Fit Intercept was selected) and one or more variables as the additional coefficients. We can use any of these models for further analysis simply by clicking the hyperlink under Subset ID in the far left column. The Logistic Regression dialog will open. Click Finish to run Logistic Regression using the variable subset as listed in the table.

The Best Subsets Details includes three statistics: RSS (Residual Sum of Squares), Mallows's CP and Probability. RSS is the residual sum of squares, or the sum of squared deviations between the predicted probability of success and the actual value (1 or 0). The #Coefficients are the number of features included in each subset. "Mallows's Cp" is a measure of the error in the best subset model, relative to the error incorporating all variables. Adequate models are those for which Cp is roughly equal to the number of parameters in the model (including the constant), and/or Cp is at a minimum.

Note: N/A values that the user observes for full models (F) simply indicate that the F-statistic and p-value were not computed. These statistics are not computed for the full model (F), containing all predictors, since the test results in 0 degrees of freedom for the F distribution, which is not defined.

In this example, we cannot reject the null hypothesis. Note that it is up to the user on how to use or interpret this information for his/her application, especially when comparing p-values that are well outside of "rejecting" range.

Model terms are shown in the Coefficients output on the LogReg_Output sheet.

Summary statistics, found directly above in the Regression Summary, show the residual degrees of freedom (#observations - #predictors), a standard deviation type measure for the model (which typically has a chi-square distribution), the number of iterations required to fit the model, and the Multiple R-squared value.

Note: If a variable has been eliminated by Rank-Revealing QR Decomposition, the variable will appear in red in the Regression Model table with a 0 Coefficient, Std. Error, CI Lower, CI Upper, and RSS Reduction and N/A for the t-Statistic and P-Values.

Collinearity Diagnostics help assess whether two or more variables so closely track one another as to provide essentially the same information.

The columns represent the variance components (related to principal components in multivariate analysis), while the rows represent the variance proportion decomposition explained by each variable in the model. The eigenvalues are those associated with the singular value decomposition of the variance-covariance matrix of the coefficients, while the condition numbers are the ratios of the square root of the largest eigenvalue to all the rest. In general, multicollinearity is likely to be a problem with a high condition number (more than 20 or 30), and high variance decomposition proportions (say more than 0.5) for two or more variables.

Click the LogReg_TrainingLiftChart and LogReg_ValidationLiftChart to navigate to the Training and Validation Data Lift Charts, Decile and ROC Curves.

Lift Charts and ROC Curves are visual aids that help users evaluate the performance of their fitted models. Charts found on the LogReg_TrainingLiftChart tab were calculated using the Training Data Partition. Charts found on the LogReg_ValidationLiftChart tab were calculated using the Validation Data Partition. It is good practice to look at both sets of charts to assess model performance on both datasets.

Note: To view these charts in the Cloud app, click the Charts icon on the Ribbon, select LogReg_TrainingLiftChart or LogReg_ValidationLiftChart for Worksheet and Decile Charts, ROC Charts or Gain Charts.

The decile-wise lift curve is drawn as the decile number versus the cumulative actual output variable value divided by the decile's mean output variable value. This bars in this chart indicate the factor by which the model outperforms a random assignment, one decile at a time. Refer to the validation graph above. In the first decile, taking the most expensive predicted housing prices in the dataset, the predictive performance of the model is about 4.5 times better as simply assigning a random predicted value.

The Regression ROC curve has been updated in V2017. This new chart compares the performance of the regressor (Fitted Predictor) with an Optimum Predictor Curve and a Random Classifier curve. The Optimum Predictor Curve plots a hypothetical model that would provide perfect classification results. The best possible classification performance is denoted by a point at the top left of the graph at the intersection of the x and y axis. This point is sometimes referred to as the "perfect classification". The closer the AUC is to 1, the better the performance of the model. In the Validation Partition, AUC = .97 which suggests that this fitted model is a good fit to the data.

In V2017, two new charts have been introduced: a new Lift Chart and the Gain Chart. To display these new charts, click the down arrow next to Lift Chart (Original), in the Original Lift Chart, then select the desired chart.

The Alternative Lift Chart plots Lift against the Predictive Positive Rate or Support. 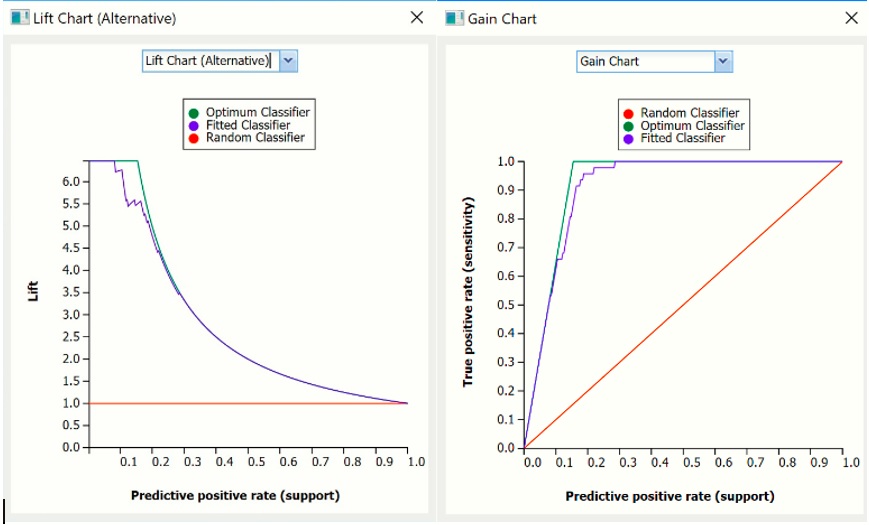 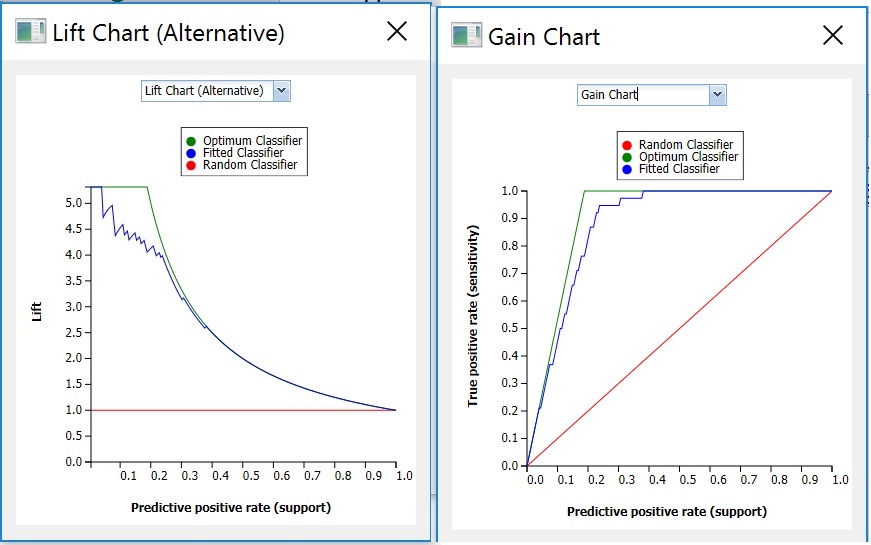