The utilities.xlsx example data set (shown below) holds corporate data on 22 U.S. public utilities. This example illustrates how to use XLMiner to perform a cluster analysis using hierarchical clustering.

An example where clustering would be useful is a study to predict the cost impact of deregulation. To perform the requisite analysis, economists would be required to build a detailed cost model of the various utilities. It would save a considerable amount of time and effort by clustering similar types of utilities, building a detailed cost model for just one typical utility in each cluster, then scaling up from these models to estimate results for all utilities.

Each record includes eight observations. Before using a clustering technique, the data must be normalized or standardized. A popular method for normalizing continuous variables is to divide each variable by its standard deviation. After the variables are standardized, the distance can be computed between clusters using the Euclidean metric. 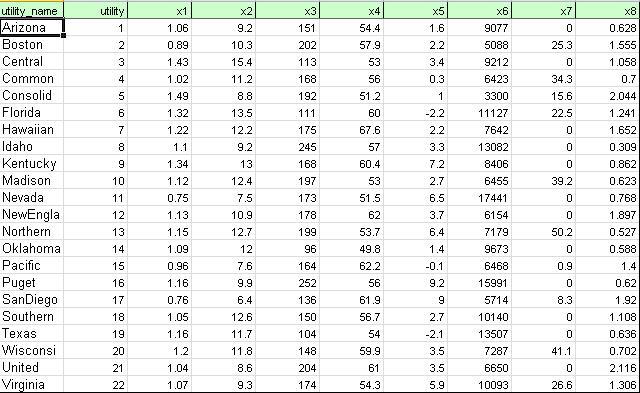 Following is an explanation of the variables.

x2:  Rate of return of capital 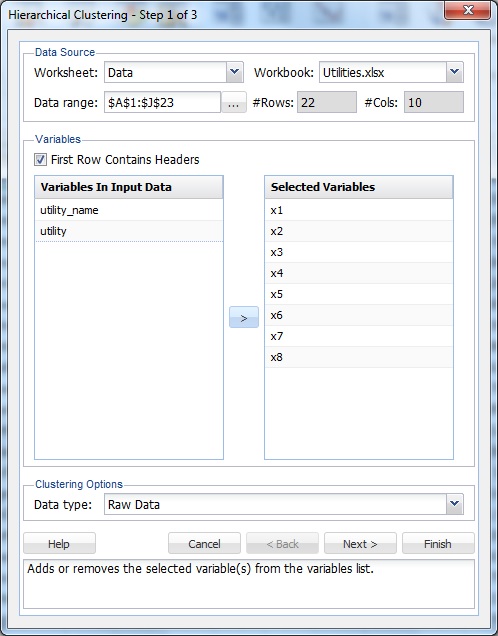 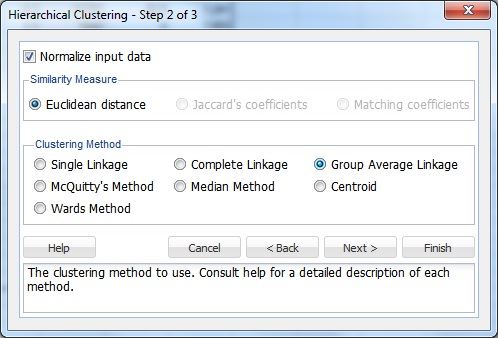 Select Normalize input data to normalize the data by subtracting the variable's mean from each observation, and dividing by the standard deviation. Normalizing the data is important to ensure that the distance measure accords equal weight to each variable. Without normalization, the variable with the largest scale will dominate the measure.

Under Clustering Method, select Group Average Linkage to calculate the average distance of all possible distances between each record in each cluster.

Draw dendrogram and Show cluster membership are selected by default. At # Clusters, enter 4, then click Finish. 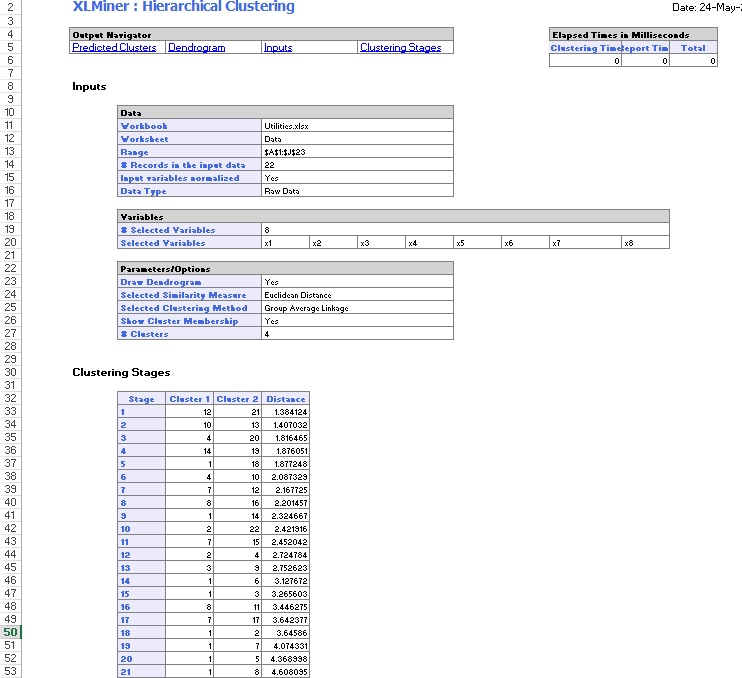 The top portion of this worksheet displays the choices made during the algorithm setup.

This process continues until there is just one cluster. At various stages of the clustering process, there are different numbers of clusters. A dendrogram graph illustrates these steps. 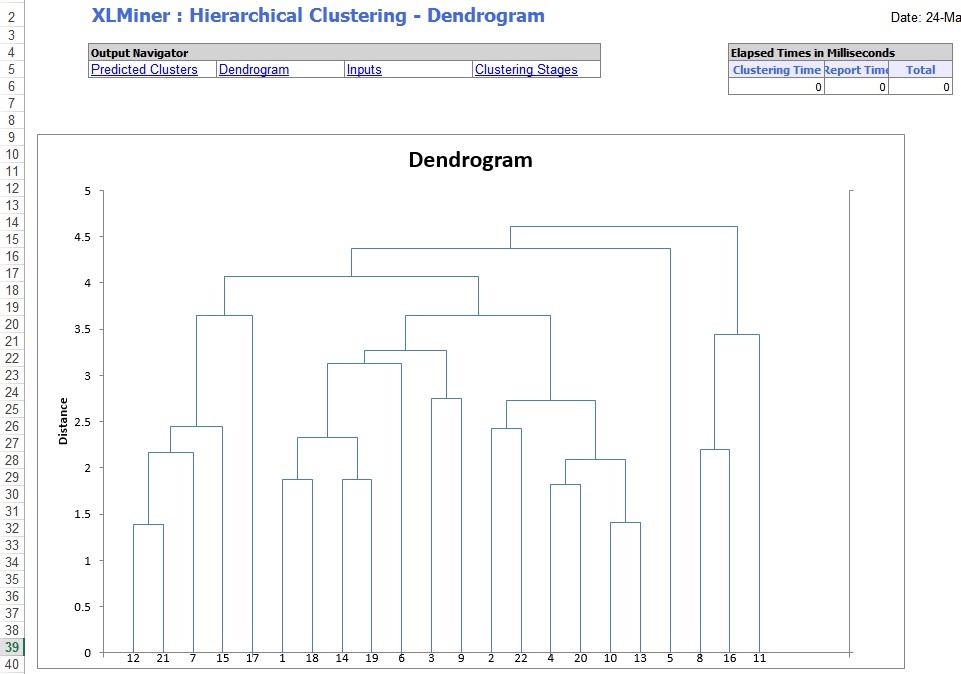 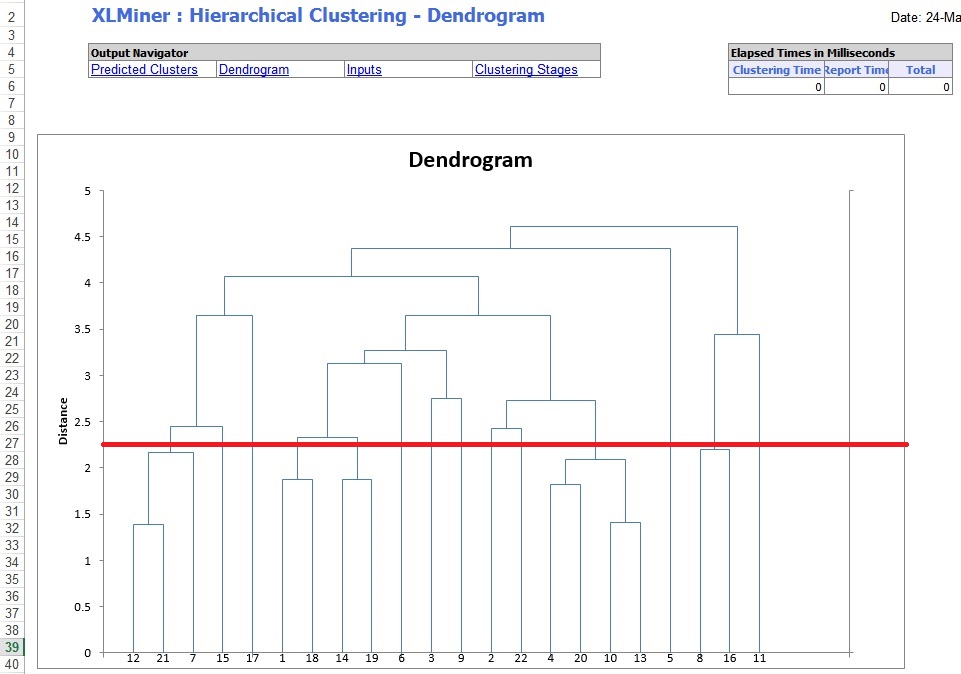 For purposes of assigning cases to clusters, we must specify the number of clusters in advance. In this example, we specified a limit of four.

When using Analytic Solver Pro or XLMIner Pro, if the number of training rows exceeds 30, then the dendrogram also displays Cluster Legends.

The HC_Clusters output worksheet includes the following table. This table displays the assignment of each record to the four clusters. 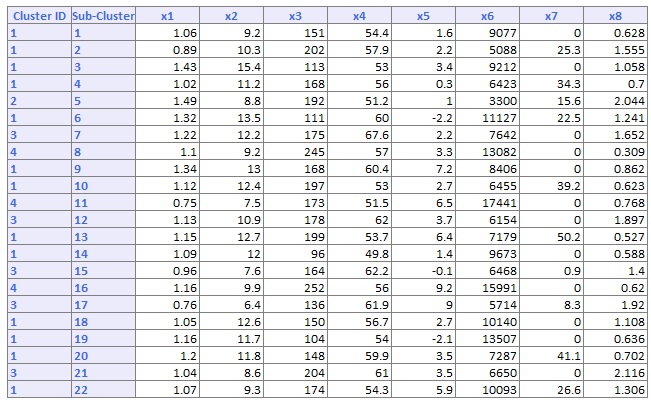 Change the Data range to C3:X24, then at Data type, click the down arrow, and select Distance Matrix. 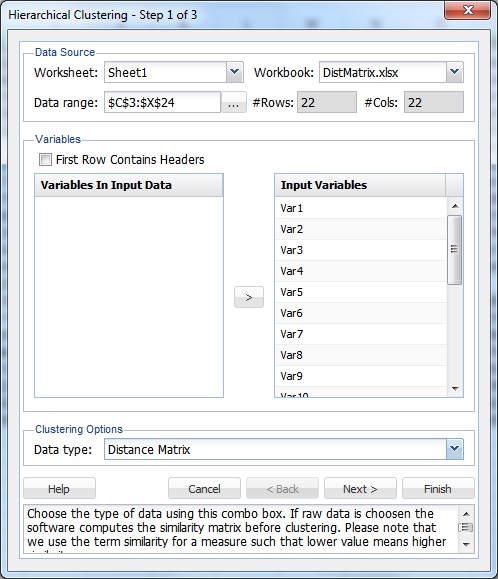 All variables are added to the Input Variables list. Click Next to open the Step 2 of 3 dialog. 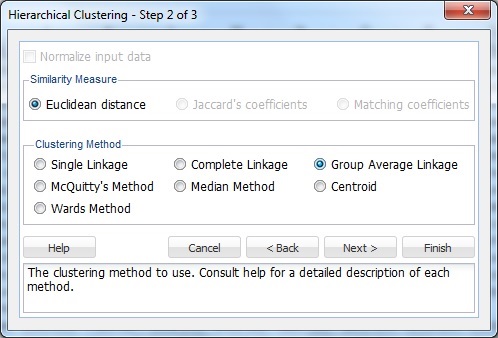 On the Step 3 of 3 dialog, select Draw dendrogram (default) and Show cluster membership (default), then at # Clusters, enter 4. Click Finish.

The Clustering Stages output (included on the HC_Output worksheet) is shown below. 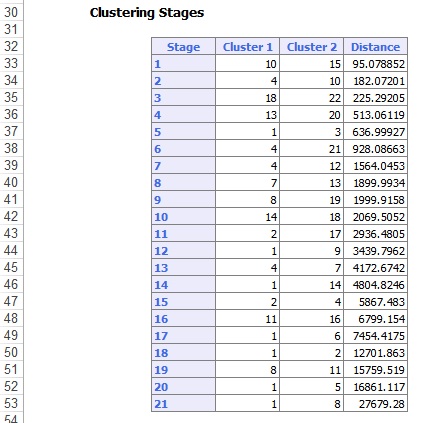 The Dendrogram output (included on the HC_Dendrogram worksheet) is shown below. 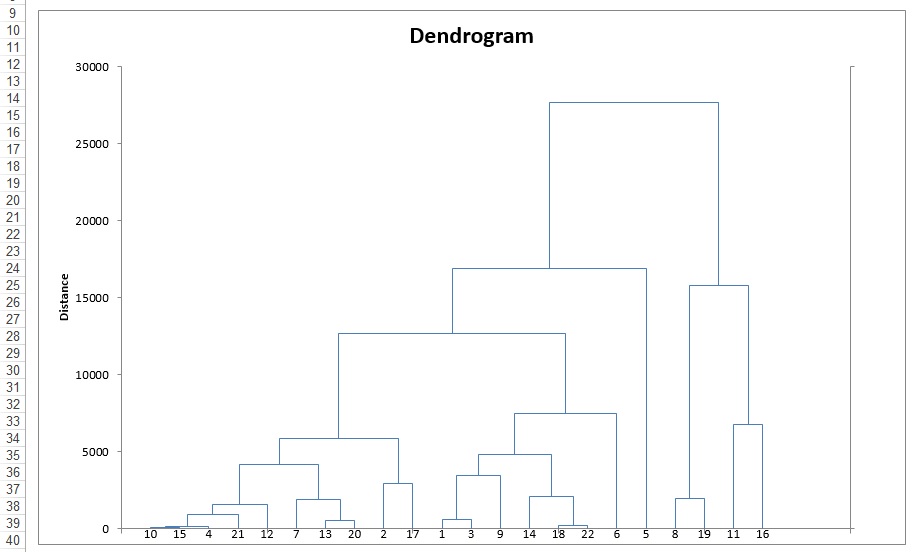 Hierarchical Clustering requires computing and storing an n x n distance matrix. If using a large data set, this requirement can be very slow and require large amounts of memory.

The algorithm makes only one pass through the data set. As a result, records that are assigned erroneously will not be reassigned later in the process.

Clusters created through Hierarchical Clustering are not very stable. If records are eliminated, the results can be very different.

Outliers in the data can impact the results negatively.