When data collected over time displays random variation, smoothing techniques can be used to reduce or cancel the effect of these variations. When properly applied, these techniques smooth out the random variation in the time series data to reveal underlying trends.

Exponential Smoothing should only be used when the data set contains no seasonality. The forecast is a constant value that is the smoothed value of the last observation.

where, k is the smoothing parameter.

XLMiner includes an optimize feature that will choose the best values for alpha and trend parameters based on the Forecasting Mean Squared Error. If the trend parameter is 0, then this technique is equivalent to the Exponential Smoothing technique. (However, results may not be identical due to different initialization methods for these two techniques.)

The following three models associated with this method.

Multiplicative: Xt = (At+ Bt)* St +et where At and Bt are previously calculated initial estimates. St is the average seasonal factor for the tth season. 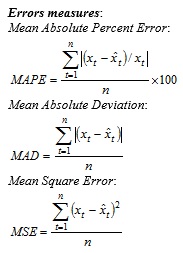