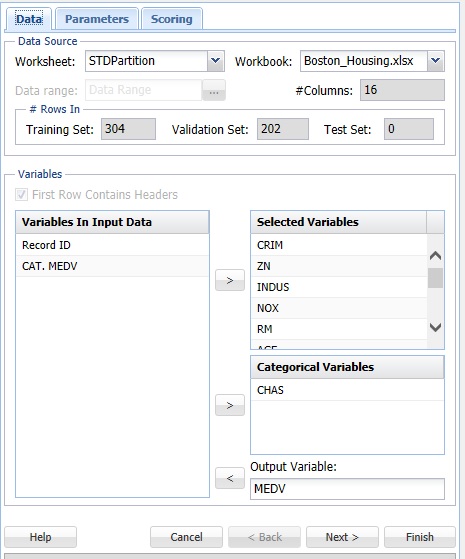 The options below appear on the Neural Network Prediction - Data dialog.

All variables in the dataset are listed here.

Variables listed here will be utilized in the Analytic Solver Data Mining output.

Select the variable whose outcome is to be predicted here. 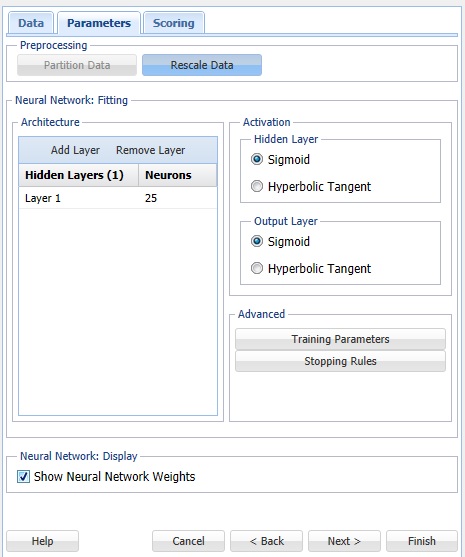 Click Rescale Data to open the Rescaling dialog. Use Rescaling to normalize one or more features in your data during the data preprocessing stage. Analytic Solver Data Mining provides the following methods for feature scaling: Standardization, Normalization, Adjusted Normalization and Unit Norm. For more information on this new feature, see the Rescale Continuous Data section within the Transform Continuous Data chapter that occurs earlier in this guide.

Click Add Layer to add a hidden layer. To delete a layer, click Remove Layer. Once the layer is added, enter the desired Neurons.

Nodes in the hidden layer receive input from the input layer. The output of the hidden nodes is a weighted sum of the input values. This weighted sum is computed with weights that are initially set at random values. As the network "learns", these weights are adjusted. This weighted sum is used to compute the hidden node's output using a transfer function. Select Standard (the default setting) to use a logistic function for the transfer function with a range of 0 and 1. This function has a "squashing effect" on very small or very large values but is almost linear in the range where the value of the function is between 0.1 and 0.9. Select Symmetric to use the tanh function for the transfer function, the range being -1 to 1. If more than one hidden layer exists, this function is used for all layers. The default selection is Standard.

As in the hidden layer output calculation (explained in the above paragraph), the output layer is also computed using the same transfer function as described for Activation: Hidden Layer. Select Sigmoid (the default setting) to use a logistic function for the transfer function with a range of 0 and 1. Select Hyperbolic Tangent to use the tanh function for the transfer function, the range being -1 to 1. In neural networks, the Softmax function is often implemented at the final layer of a classification neural network to impose the constraints that the posterior probabilities for the output variable must be >= 0 and <= 1 and sum to 1. Select Softmax to utilize this function. The default selection is Standard. 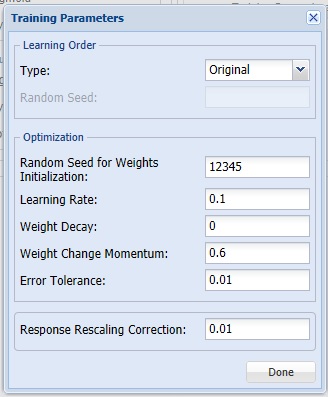 This option specifies the order in which the records in the training dataset are being processed. It is recommended to shuffle the training data to avoid the possibility of processing correlated reocrds in order. It also helps the neural network algorithm to converge faster. If Random is selected, Random Seed is enabled.

This option specifies the seed for shuffling the training records. Note that different random shuffling may lead to different results, but as long as the training data is shuffled, different ordering typically does not result in drastic changes in performance.

If an integer value appears for Random Seed for Weights Initialization, Analytic Solver Data Mining will use this value to set the seed for the initial assignment of the neuron values. Setting the random number seed to a nonzero value (any number of your choice is OK) ensures that the same sequence of random numbers is used each time the neuron values are calculated. The default value is “12345”. If left blank, the random number generator is initialized from the system clock, so the sequence of random numbers will be different in each calculation. If you need the results from successive runs of the algorithm to another to be strictly comparable, you should set the seed. To do this, type the desired number you want into the box.

This is the multiplying factor for the error correction during backpropagation; it is roughly equivalent to the learning rate for the neural network. A low value produces slow but steady learning, a high value produces rapid but erratic learning. Values for the step size typically range from 0.1 to 0.9.

To prevent over-fitting of the network on the training data, set a weight decay to penalize the weight in each iteration. Each calculated weight will be multiplied by (1-decay).

In each new round of error correction, some memory of the prior correction is retained so that an outlier that crops up does not spoil accumulated learning.

The error in a particular iteration is backpropagated only if it is greater than the error tolerance. Typically error tolerance is a small value in the range from 0 to 1.

Click Stopping Rules to open the Stopping Rules dialog. Here users can specify a comprehensive set of rules for stopping the algorithm early plus cross-validation on the training error. 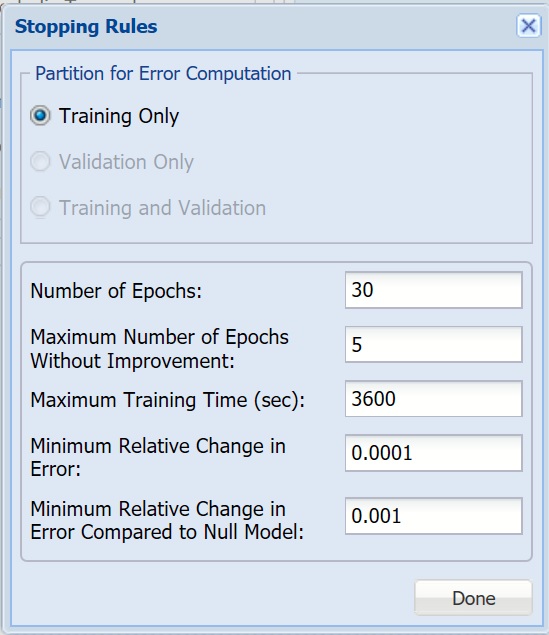 Specifies which data partition is used to estimate the error after each training epoch.

An epoch is one sweep through all records in the training set. Use this option to set the number of epochs to be performed by the algorithm.

Maximum Number of Epochs Without Improvement

The algorithm will stop after this number of epochs has been completed, and no improvement has ben realized.

If the relative change in error is less than this value, the algorithm will stop.

If the relative change in error compared to the Null Model is less than this value, the algorithm will stop. Null Model is the baseline model used for comparing the performance of the neural network model.

Select these options to show an assessment of the performance of the tree in predicting the output variable using the training data. The report is displayed according to your specifications - Detailed, Summary, and Lift Charts.

These options are enabled when a validation dataset exists. Select these options to show an assessment of the performance of the algorithm in predicting the value of the output variable using the validation data. The report is displayed according to your specifications - Detailed, Summary, and Lift Charts.

These options are enabled when a test dataset exists. Select these options to show an assessment of the performance of the algorithm in predicting the value of the output variable using the test data. The report is displayed according to your specifications - Detailed, Summary, and Lift Charts.

The options in this group apply to the model to be scored to an altogether new dataset. See the “Scoring New Data” chapter for details on these options.